Born and raised in Rio de Janeiro, Richard first came to Los Angeles to study cinema at UCLA in the late 90's. An editor by craft, he made his directorial debut in feature films with the animated documentary ‘Pablo’, on seminal graphic artist, Pablo Ferro.

Narrated by Jeff Bridges it featured a number of brilliant filmmakers and creative collaborators telling the story of the artist behind the look and feel of much of Stanley Kubrick’s and Hal Ashby’s work, and one of the men who made title sequences “a thing.”

Richard's debut film premiered in Rotterdam and was the opening Gala at the Los Angeles Latino Film Festival in 2013. Pablo opened to laudatory reviews, featured in dozens of cinema and design publications internationally, and sold in several territories

"Pablo is a wonderful delve into the life and talent of renowned film title designer, artist,  and bohemian Pablo Ferro, this enthralling documentary is a must for any lover of cinema"

"A fully realized and remarkable visual and aural interpretation of Pablo Ferro's singular life. I love the expressive documentary and with Pablo I have a new favorite!"

In Richard's latest film, the animated A Thousand Kisses he collaborated with celebrated Irish art director Alan Dunne who helped reimagine the Berlin and Rio de Janeiro of the early 30's. The screenplay is carved off the recently discovered correspondence of a war torn couple separated in 1933.

A Thousand Kisses premiered at the esteemed Annecy Film Festival in 2018 and has been warmly received in over 40 festivals, museums and cultural centers. It's next scheduled to play at the Lincoln Center Film Society in January 2019.

"A Thousand Kisses is a stunningly beautiful film about a horrifically ugly time that selects a half-forgotten story, from the endless ocean of history, and uses it to teach us again how love conquers hate".

Baba de Quiabo (freely translated as Lip Service, or: how the fox outsmarted the other fox) is Richard's episode of Canal Brasil's "Sound and Time" - a series of half hour episodes inspired by Brazilian music styles.

For his episode, Richard turned his lens on the captivating world of Old Rio and roots samba. The movie stars Carol Castro and features a host of cameos from renowned Brazilian performers such as Jards Macalé, Wilson das Neves and Martnália among other. It was executive produced by acclaimed producer Sara Silveira.

Interested in creating media about environmental content, Richard has been developing a comedy series about the not so funny effect of man's footprint on the planet. For this Earth Day video, Richard joined efforts with comic and social media influencer Moses Storm and shot a special for Comedy Central in 2018.

In Ice to Iceland, Moses takes action against climate change with the arguably bad idea of bringing ice to the arctics as a way to placate the melting ice caps.

In addition to the more authoral-driven Pablo, Richard also helmed two feature documentaries: Gameplay, on the development and societal impact of videogames.

...and Lost Town, about the history of the mythical Trochenbrod, a small town in Ukraine that ceassed to exist on a fateful Nazi invasion in 1941. Trochenbrod was made famous by John Safron Foer's Holocaust Novel "Everything Is Illuminated". Lost Town was produced under fiscal sponsorship of the Foundation For Jewish Culture and supported by George Lucas' Skywalker Studios.

‘Lost Town’ an imaginative tribute to memory. Richard Goldgewicht has fashioned a remarkable documentary that serves both as memorial to a vanished way of life and as celebration of persistence."

In 2018, Richard directed a 6 episode series on famed music producer Lincoln Olivetti, the 'pop wizard' who masterminded much of the sound of the funk and disco inspired Brazilian popular music of the 80's and 90's. Lincoln has been talked about as a Brazilian "Quincy Jones", though he's  certainly an international reference in his own right. With Gilberto Gil, Maria Rita, Moraes Moreira, Fagner, Lulu Santos and dozens of Brazilian music luminaries.

Provivi's field trials in all continents have supported the research and development of their large scale pheromone product intended as a clean and organic crop protection method used outside traditional toxic pesticides. 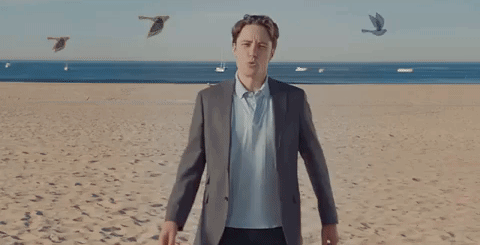 In the branded documentary/corporate space, Richard has also produced the Brazilian arm of campaigns such as the 2014 My Personal Economy for HSBC, for Saatchi and Saatchi, London.

Richard's films and projects have covered a wide array of topics, ranging from music, design, US-Mexican relations, anti-semitism, the dystopian world of technology, sexual politics and his love of Brazil.

He's drawn to uncomfortable stories which he enjoys tackling with a light touch and a sense of humor. His background as a documentary maker and experience directing animation have informed a style that blends both a more formalist and allegorical approach but with a humanist and eye level angle.

Collaborating with different writers, his screenplays placed semi-finalist at the Nicholl Fellowship and finalist at Oaxaca Film Festival in Mexico and are currently out to talent and set up for immediate production.